Much of the debate regarding rent control is centered around how to split this value from the rental housing market between tenants and housing providers. But decisions the District makes about rent control policy would have impacts that go beyond the size, value, and tax contributions of the rent-controlled stock. The housing market in the District of Columbia is interconnected. Different components—rentals versus owner-occupied, subsidized versus market rate—are distinctions we adopt for policy, but these segments work together and respond to changes in each other. Individual actions by renters, homebuyers, banks, investors, and developers—including decisions taken in response to policy changes—collectively shape the housing market and determine the market’s ability to meet overall housing needs. Because of the complexity of this ecosystem, a singular policy lever such as “stricter rent control” will not always get to the desired result.

In the case of B23-873, stricter rent growth will reduce the operating incomes for rental apartments and reduce tax revenue for the city. But the bill’s impacts would not end there. Over time, because they have lower profits, some providers will invest less in their buildings reducing the quality of housing.[1] Others will convert buildings into condominiums or coops. The impacts would be felt on future development too: rental housing projects that have not broken ground yet might be delayed or converted into condominium projects. Or they could be completely scrapped. All these would make rental housing more—and not less—expensive and could result in greater resident displacement.

Drainage out of the rental market

If all units that would be subjected to rent control under B23-783 by 2033 remain active as rentals, the number of rent-controlled units in the District would increase to 112,400—a 55 percent increase from the current stock, or approximately 5,000 more than the units placed under rent control when the District enacted the Rental Housing Act in 1985.[2] But actual growth in the rent-controlled stock will likely be lower than the total number of units impacted by this bill. Loss in rental income, inability to cover costs, and higher returns elsewhere could incentivize housing providers to convert their units into condominiums or take them out of the housing stock altogether if the cost of keeping them habitable becomes prohibitive.

Both the District’s own experience with rent control, and analyses of rent control laws from other jurisdictions, show that housing providers do respond to tightening of rent control laws by taking their units out of the rental stock, especially if they expect that a loss of rental income will make it more difficult to cover operating costs, or if they can find better returns in alternative investments.

For example, one study from 1988 shows that at the time of the enactment of the Rental Housing Act, the District had an estimated 107,000 units under rent control; today, it has 72,878.[3] This puts the loss in rent controlled units at 31 percent over 35 years (or an annual rate of about 0.9 percent). Further, data from apartment directories from the early 1990s show that this was more rapid immediately following the enactment of the Rental Housing Act. The best we can tell, within the first seven years of rent control, the number of rent-controlled units in multifamily rental apartment buildings had already dwindled down to slightly above 85,000.[4] This is the equivalent of a 2.7 percent loss in units each year. Many of these units were converted into condominiums.[5]

Other research corroborates these findings. For example, in her book, The Politics of Staying Put, [6]  Professor Carolyn Gallaher estimates that between 2000 and 2007, some 1,147 rental apartment buildings with 26,645 units were converted into condominiums in the District.[7] Some of these units were purchased by their previous tenants under the District’s TOPA laws. But others, in buildings where tenants did not exercise their TOPA rights, or have signed away those rights, the units have often been redeveloped into expensive units with prices the former tenants are not able to afford—what Professor Gallaher calls “exclusionary displacement.” There is presently no data available to quantify how rents change when units are converted under TOPA laws, but in her sample of seven buildings that changed ownership through TOPA, she finds that forty percent of units went through TOPA ended up as units beyond the means of their former low- and middle-income tenants.

These impacts are not unique to the District. For example, only 10 years after San Francisco extended its rent control laws to buildings with fewer than five units, the number of rental units in such buildings had declined by 15 percent, and the number of tenants in these buildings had declined by 25 percent. This is the equivalent of 1.5 percent loss each year. Similar magnitudes of unit loss have been documented for New York and New Jersey municipalities that have rent control ordinances.[9]

Given these experiences, what could the rent-controlled stock look like under B23-873 fifteen years after its enactment (which would subject nearly all rental apartment units in today’s stock to rent control)? As noted earlier, when enacted, B22-873 would immediately bring into rent control 8,628 units in small buildings with four units, and 4,705 units in large mutifamily buildings (all built before 2006). By 2033, the total number of units covered by this bill would increase by 39,337 units, bringing the number of units potentially under rent control to 112,419. 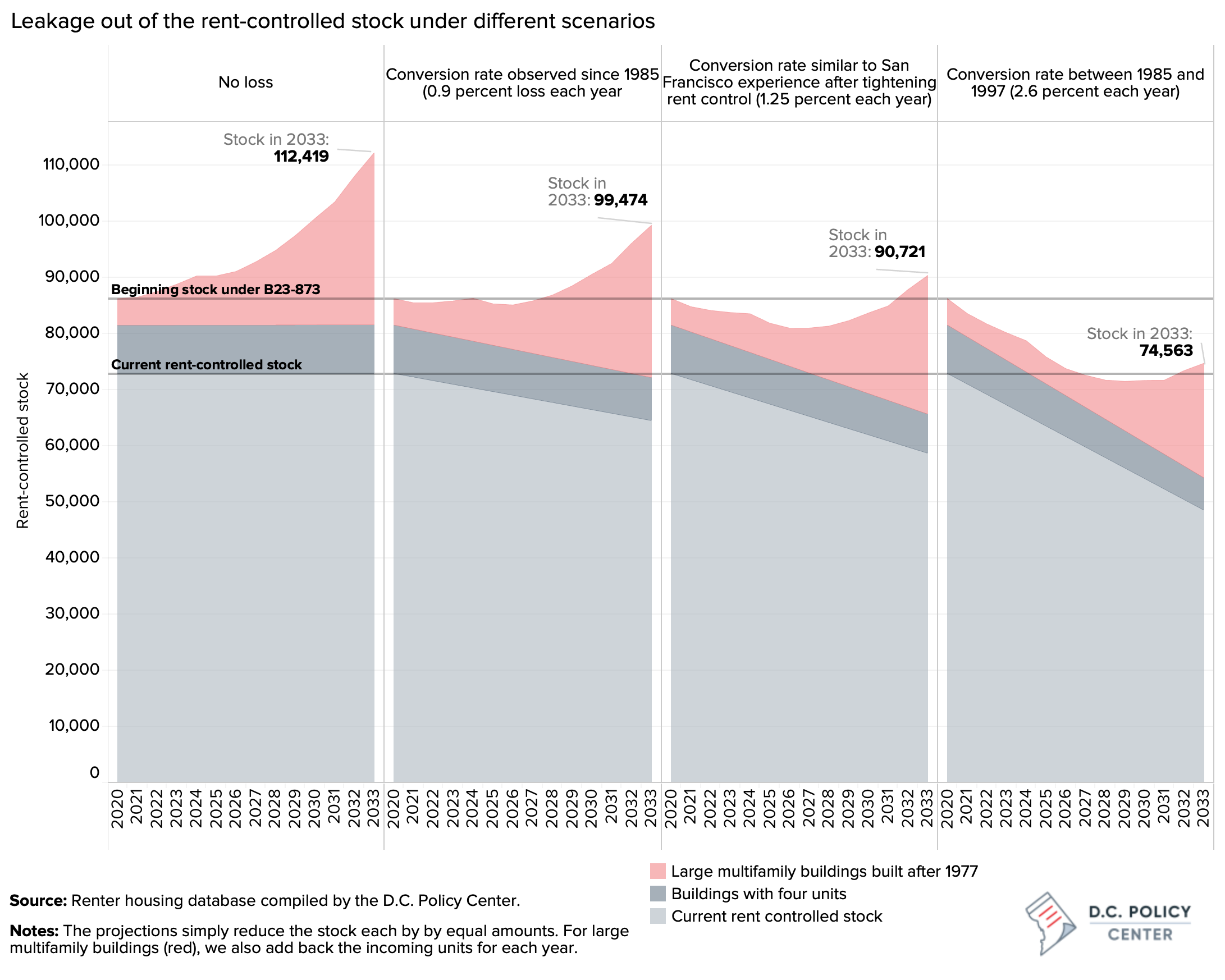 It is important to note that it is not possible to precisely estimate what the actual leakage rate might be during this period. Providers’ decisions to “remain in service versus sell” would largely depend on market rent trajectories, and their ability to find buyers. However, the significant reduction in potential rent growth compared to current law and the consequences on property valuations (and therefore returns to investment) under B23-873 could lead to a much deeper loss in the rent-controlled stock than what the District has historically experienced.

Impacts on the future of housing

Today’s housing stock is the sum of the unit production in previous years. If production slows down for long periods of time, the stock suffers. In the height of a construction boom, it seems like building may go on forever, but that’s seldom the case. It takes a unique confluence of factors to have a continuous construction boom in the residential sector: a growing population (and a growing number of households), a robust economy, reliable government services, sound financial management, a high quality of life that is attractive to residents, expectations on the developer’s side that their investments will yield acceptable returns, willingness on the part of financing institutions to lend to developers, which means they see the market a worthy investment with low risks, and policies that signal the city welcomes investments.

The District has been experiencing a continuous construction boom since 2005. Tax records put the net growth for all housing during that period at over 45,000 units.[10] Three quarters of the units built during this time are rentals (90 percent in the last four years). What happened between 1968 and 2003 was not in response to a single city policy; rather it reflects that market conditions, including the District’s falling population, deteriorating economy and finances, poor government services, which collectively contributed to an unstable economic environment that did not provide returns sufficient enough to investors to build in the city. This is not to say that B23-873 will alone be responsible a precipitous decline in housing construction; but it is to highlight that housing supply and affordability today are s a function of construction volume in the past. To the extent that stricter rent control laws diminish current production, future renters and homeowners will face higher housing costs.

Can rents still be high if a larger share of the stock is subjected to rent control?

It is an easy thing to assume that a stricter rent growth restriction applied to a larger share of rental housing would eventually reduce the rent growth in the entire city, and thus, overtime, make housing in D.C. cheaper. But given that there is a rental market beyond rental apartments, and the impacts of stricter rent control could lead to faster rent growth for rental units outside of the apartment buildings.

Already, single-family homes, condominiums, flats, and units in conversions, make up nearly 40 percent of the District’s rental housing.[11] This “shadow rental market” (a less regulated—and sometimes unregulated—source of housing) is fluid. Homeowners frequently move their units in and out of the rental market. For example, one fifth of the 87,000 owner-occupied condominiums and single-family homes in 2006 had become rentals in 2019. Conversely, of the 39,500 condominiums and single-family homes that were rentals in 2006, nearly 15,000 (38 percent) were, as of September 2019, owner-occupied. If fewer rental apartments are built or some rental apartments are converted into condominiums, then, over time more renters would increasingly turn to the shadow rental market, bidding rents up and enticing more homeowners to rent their units. This pressure, especially from high-income renters, could make the affordable and attainable units in the shadow rental market more expensive. High income renters are already a source of pressure on the District’s rental housing: An estimated 47,000 renters in the District who earn 30 percent of AMI, and 42,000 renters who earn over 120 percent of AMI. These affluent renters could easily push low-income renters out of the shadow rental market by offering to pay higher rents. As a result, rents could increase faster even when rent control laws are stricter.

[1] For buildings under mortgage, if the assessed values fall below the lender-required loan-to-value ratio, providers would be further pressured

[2] For details, see Margery A Turner, “Rent Control and the Availability of Affordable Housing in the District of Columbia: A Delicate Balance” (Urban Institute, 1988). Interested readers can find a brief history of the District’s rent control laws here.

[4] Based on a review of apartment building directories from 1992, the D.C. Policy Center found 85,000 units that would be subject to rent control.

[5] Condo conversions do not necessarily take units out of the rental market, but could take them out of the rent-controlled stock. Administrative data suggest that since 2006, about 9,770 rental apartment units have been converted into an ownership structure. Among these, 48 buildings restructured themselves as cooperatives between 2006 and 2009, removing 726 units from the rental stock. The remainder, or about 9,000 units, became condominiums, and of these, one third are now occupied by their owners. This estimate is developed by comparing 2006 tax record to 2019 tax records.

[7] The source for these numbers is data provided to the author by the Department of Consumer and Regulatory Affairs.

[8] Estimated by examining the use codes for properties that have continuously been on the tax rolls between 2006 and 2019.

[10] WDCEP’s economic deveopment report puts it to closer to 70,000 but this discrepency is largely because these are gross numbers which do not account for the units taken out to make room for new development. Tax records account for this.