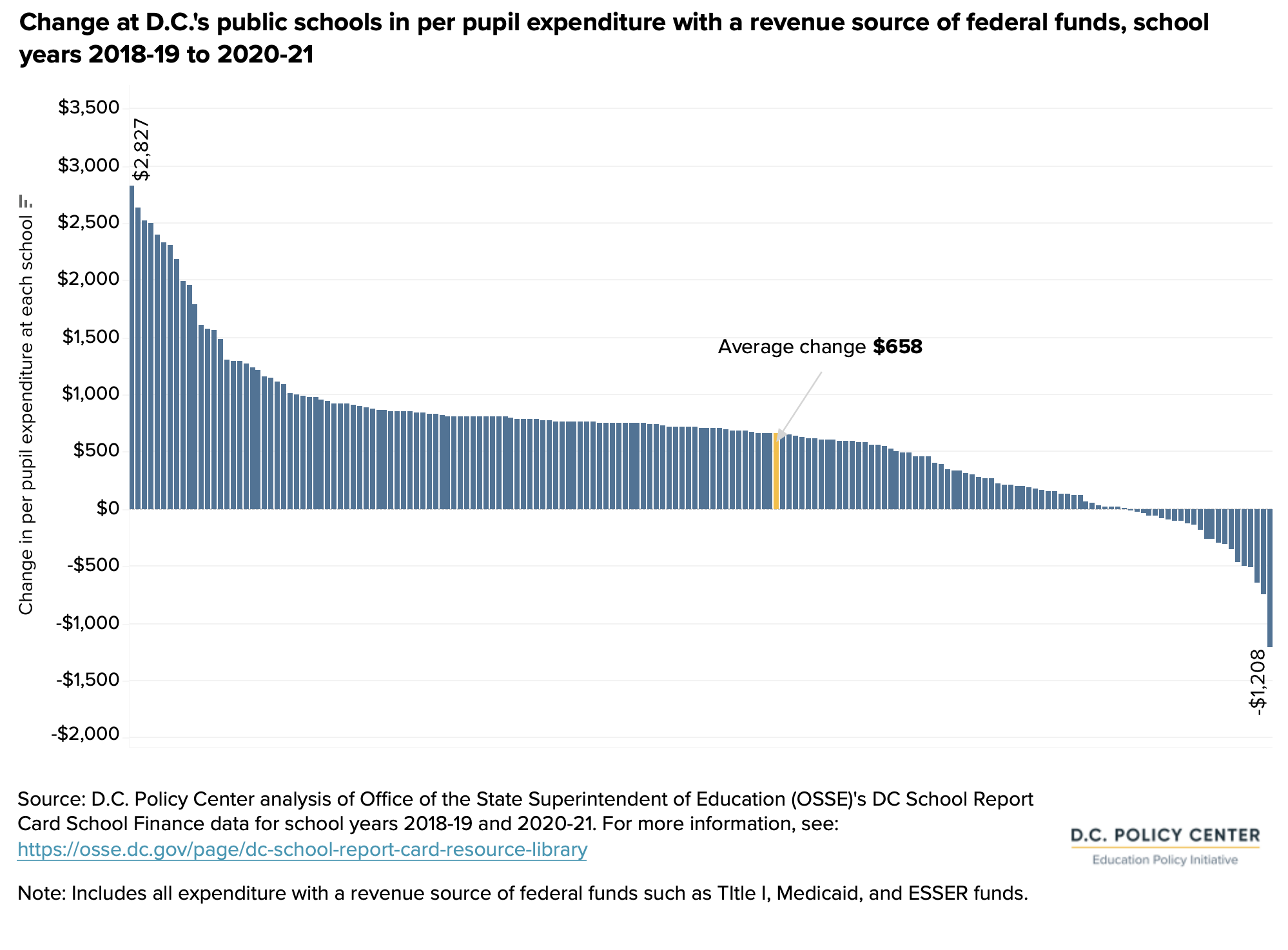 The federal government has provided pandemic recovery funding for schools over three rounds of Elementary and Secondary School Emergency Relief Fund (ESSER) grants. In D.C., the three rounds of ESSER funding for Local Education Agencies (LEAs)1 added up to $540 million allocated to schools to be spent by the end of fiscal year 2024. This is the equivalent of about $1,307 per student per year.2

The Office of the State Superintendent of Education (OSSE) recently launched a dashboard to track spending of ESSER funds by LEA. As of August 2022, $113.5 million of these LEA-level ESSER funds have been spent, or 21 percent of the total. The majority of ESSER funds (76 percent) has been spent on accelerated learning. This category includes a lot of activities, such as access to technology, assessments, extended day or school year, tutoring, supports for students with disabilities and English learners, and professional development. But the data do not allow us to see how funding was allocated to these subcategories. Additional detail at the sub-category level would help better understand how LEAs prioritized their approaches to accelerated learning. Other large categories for spending include safe reopening and student/staff wellness.

The only available information on federal spending (including ESSER) at the school level looks at total federal spending from school year 2018-19 to school year 2020-21 in the DC School Report Card School Finance data. During this time, federal spending at the school level per student increased from 10 percent to 12 percent of total per student spending, or 2 percentage points (an additional $658 per student on average). This includes all expenditure with a revenue source of federal funds, such as Title I and Medicaid. ESSER funds are likely the largest addition to federal funds over this period, which means looking at the change largely reflects this new source of funding. Based on the change in expenditure of federal funds during the first full school year of the pandemic, some schools have come to rely more on federal funds. Out of 180 schools with data for both years, 15 had an increase of at least double the average amount, suggesting that these schools will face more of a fiscal cliff after 2024 when the ESSER funds expire. Additional detailed data at the school level on ESSER funds would help better understand the fiscal cliff at particular schools.

For more information on ESSER fund expenditures, see Testimony to D.C. SBOE on ESSER funds and the future of school finance in the District.

The role of school boundaries in the District of Columbia: Facts and findings on boundary participation, student representation, and facility utilization

Map of the week: Where did D.C.’s former students attend postsecondary in the fall of 2020?