Bird’s-eye view of DC metro area then and now

My father took me on my first airplane ride in 1950. It was on a DC-3 that took off from Washington National for a half-hour sightseeing flight over Washington, DC.  (That’s a measure of how uncommon air travel was almost 70 years ago.)

Our plane flew over all the Nation’s Capital’s iconic sights, including (for this newly-minted Washington Senators fan) Griffith Stadium, then circled the area. There didn’t seem to be much else visible from the air outside of the District. In Montgomery and Prince Georges Counties, houses and strip shopping centers hugged Western and Eastern Avenues–Bethesda, Silver Spring, College Park, Hyattsville, and Bladensburg.

Crossing the Potomac again, built-up areas covered all of Falls Church, Arlington, and Alexandria (where we lived in Parkfairfax next to Shirley Highway). However, little was to be seen in surrounding Fairfax County except for a strip of development along US 1 leading to Fort Belvoir. I looked fruitlessly for Bailey’s Crossroads Airport, a little, dirt and gravel airport that on weekends my father would drive us to see. (We called it “Pilot Small’s Airport” after Lois Lenski’s popular children’s book.)

Fly into the Washington area today and you are likely to land at Washington Dulles International Airport, in eastern Loudoun County, 31 miles and an hour’s drive (if you’re lucky) from the US Capitol.

If you update my 1950 flyover of the Washington area, you’ll see continuous residential and commercial development covering eastern Loudoun County to Leesburg and all of northern Fairfax County.

In Prince Georges County, intensive development extends out to Bowie, Upper Marlboro, and Fort Washington. Re-crossing the Potomac, all of southern Fairfax County is now built up, as is most of Prince William County with tendrils stretching out to Warrenton in Fauquier County and to Stafford County Courthouse.

Most poignantly, Pilot Small’s Airport closed in 1970 to become the site of the massive Skyline Center high-rise office, apartment, and retail complex.

How can one measure such sprawl? The U.S. Census Bureau offers one method: an urbanized area. An urbanized area (UA) is formed of contiguous census blocks with a density of at least 1,000 persons per square mile, or at least 500 persons per square mile if the census block contains a mix of residential and nonresidential uses (parks, schools, commercial, retail or industrial uses). In short, any urbanized census block is likely to look “developed” from our bird’s-eye view.

Whip out your calculator and you’ll find that urbanized population grew 256 percent but urbanized land ballooned 641 percent–two and a half times as fast. That land growth-to-population growth ratio (2.50) is the best measure that I’ve come up with for comparing the degree of urban sprawl among multiple UAs across six decades.

How does the Washington UA compare with other UAs?

The chart below lists the 41 UAs with over 1,000,000 residents. In its land growth-to-population growth ratio, the Washington UA falls about in the middle. (You can download the full data set here) “Wait a minute,” you may say. “I’ve flown into San Jose (or Los Angeles or Las Vegas). I look down and say “Wow, what sprawl!”

That’s only because in an arid or semi-arid zone you can see everything that’s been built. If you could strip away all the tree cover of places like the Detroit area or the Milwaukee area or the Pittsburgh area, you’d see that since 1950 much more land has been consumed for far fewer people there than has happened in the San Jose area or Los Angeles area or Las Vegas area.

So, if you’ll believe my statistical evidence (rather than “your lyin’ eyes”) of “least sprawling” and “most sprawling,” you’ll notice from the table some characteristics whose relevance I have confirmed through statistical analysis. 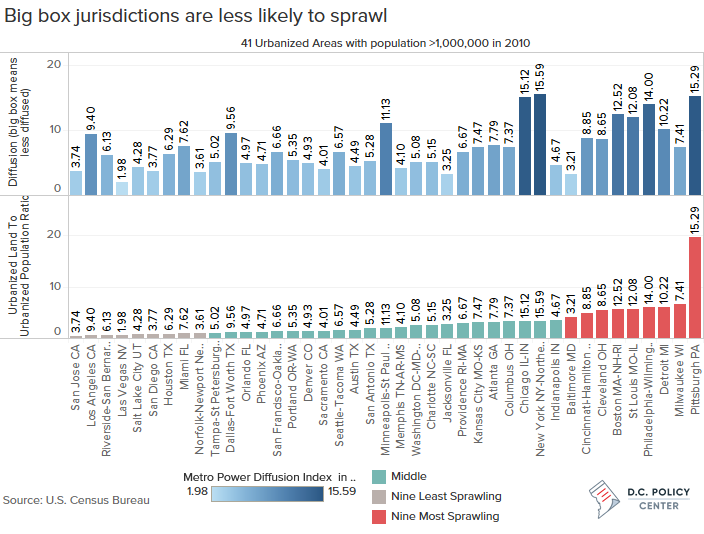 So where did the Washington DC-MD-VA UA stand on this checklist?

Finally, there is Metro, whose impact on concentrating jobs and housing within the District and Metro-served suburban nodes has been substantial.

What Is Urban “Elasticity”?

In Cities without Suburbs (1993) I developed the concept of a central city’s elasticity. In the Age of Sprawl, I consider a city with a lot of vacant or underutilized land, or one which could expand its boundaries through annexation to take in new, largely undeveloped land as “elastic.” A city already largely built up or locked within existing city limits, I characterize as “inelastic.”

The elasticity score combines the effect of a city’s density (population per square mile) in 1950 and the degree to which it expanded its city limits between 1950 and 2010. A city with a low density back in 1950 (compared to others in my list of 163), and which since then has been able to increase its jurisdictional territory would be considered elastic (with the latter metric getting three times the weight in my composite score). The higher the score, the higher the elasticity.

[1] The US Census Bureau only designates the boundaries of urbanized areas with every decennial census so we will have to await Census 2020 for more current information.   As of July 1, 2016, DC’s population estimate was 681,170 – a strong rebound from a low of 572,059 in 2000 – but the Washington DC-MD-VA UA will have grown as well.